Which came first – the slug or the sluggish

If you’re anything like me, you have probably spent your life just sort of assuming that if a person is called “sluggish” it’s because the resemble in some (certainly unflattering) way those slimy, crawly garden and forest critters that are like snails currently between permanent addresses. 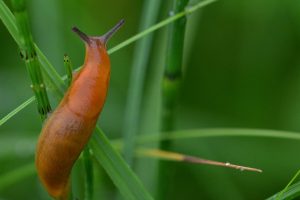 Actually, that assumption is totally backwards, and I was today years old when I discovered that.

The first use of the word “slug” to describe “a slow-moving slimy gasteropod or land-snail” in the OED dates back to 1701. Almost 100 years earlier, there’s evidence of a “slug” being “an animal, vehicle, etc., of a slow-moving or sluggish character” – a sort of catch-all term for anything that wasn’t in a particular hurry to get anywhere or do anything.

The earliest citation for ‘slug’ as a noun comes way earlier than that, even – all the way back in 1425 – when it referred to not an animal at all, but a slow, lazy person.

That’s right, someone isn’t sluggish because they’re slow like a slug; a slug is a slug because it’s slow like a lazy person.

A Canadian (Ryan) and a Scot (Amy) talking about the words in the English language that fascinate them most at the moment, looking at their histories and origins and trying to piece together just how they got to where they are today.

This is a podcast for anyone interested in etymology (the study of words and their origins/history). If you’ve ever found yourself happier after discovering some bizarre bit of trivia about a word that you hadn’t even given a second thought to (such as how the word ‘trivia’ relates to its Latin components meaning “three roads”), this might just be the podcast for you.